Dr. David Davis, MD, gives insight into the multiple toxins along with an intensive vaccine schedule that ultimately contributes to the rise of Autism and Crib Death (Sudden Infant Death Syndrome, or SIDS). His book, “Dancing Cats, Silent Canaries—A Traditional Medical Doctor Takes A Closer Look At Unsolved Epidemics Of Autism & SIDS And Proposes A Solution,” brings to light that multiple vaccines early in life combined with the highly toxic PVC used to make baby mattresses and cribs contribute to the alarming rate of Crib Death (Sudden Infant Death Syndrome, or SIDS) and Autism.

Dancing Cats comes from an epidemic that occurred in Minimata, Japan following World War II. Villagers in a fishing community noticed cats seemed to be dancing, started reporting it to the local newspaper. It turned out that soon infants began to have seizures. Older people began to have abnormalities of vision and hearing and numbness and tingling, which seemed to be signs of methylmercury poisoning.

So the term “dancing cats” was derived from an epidemic that was caused by an environmental toxin at a polyvinyl chloride manufacturing site on the banks of the bay that first affected cats before it spread to humans. And actually, Dancing Cats was covered up for almost 20 years. Neither manufacturer, the Japanese Medical Association, or the doctor who worked for the company revealed to the villagers they were being poisoned by the fish they were eating.

The term “Silent Canaries” is well-known. Canaries were always brought into coal mines. They would stop singing if the oxygen was being replaced by potentially toxic gases, such as methane or carbon monoxide. We feel that, in some respects, children being brought into existence are being surrounded by mineshaft. The mineshaft consists of toxins, and many of these babies are becoming silent. Some become silent because they don’t survive the first year; they die mysteriously at age two to eight months of a disease we call sudden infant death syndrome, otherwise known as crib death.

Crib death may be avoidable. It seems to arisen in parallel with the introduction of PVC into our baby mattresses. When Dr. Sanjay Gupta talks about toxic America and talks about PVC, he makes reference to the fact that the instance of autism near PVC manufacturing sites is higher than elsewhere. The instance of liver cancer among PVC workers is higher. He doesn’t mention the fact that babies are confined to PVC mattresses 18 hours a day from the day they were born. He doesn’t mention the fact that car seats, playpens, strollers are invariably made from PVC.

PVC is not only extraordinarily toxic in its own right, it contains antimony, a fire retardant. Many cases, arsenic is present with antimony, or it’s been added as a fungicide. Phosphorus is added as a stabilizer. The net result is that a baby mattress is a cesspool of toxins. They become more accessible to a baby if the mattress becomes mildewed. There’s no question, though. Though the theory advanced by Dr. Richardson in 1989 was dispelled after four years of research in the U.K., in order to change what Richardson was saying, we have to go back to another epidemic that occurred in 1891. That epidemic involved babies dying in SIDS like fashion on the floors during the winter in fashionable homes in Europe.

The homes all contained a beautiful Paris Green wallpaper. Paris Green was used to make them vivid colors, particularly the green that was fashionable. Unfortunately, it was made from arsenic. All the chemist had to do was identify arsenic in the wallpaper, identify mildew on the wallpaper, and he had the answer to the epidemic. Arsine gas was being liberated by the accent of mildew. Not surprisingly, Richardson, in 1989, thought he was actually repeating the research done in 1891 by Gosio, the famous chemist.

But instead, Richardson was finding antimony was being metabolized by mildew through a process of methylation into the gas known as stibine. Antimony is used as a fire retardant in mattresses. So not only is the PVC dangerous, but the antimony is extremely dangerous. We recently had an epidemic of ten babies die in Fort Bragg in North Carolina in the same housing. Three of the babies actually died in the same house. It’s almost a vivid sighting, once again, of what happened in 1891, and yet no one can draw the conclusion there was anything in those houses that was similar and may have been responsible for the deaths of those ten babies.

As I was developing the whole theme around PVC, it became apparent that many of our autistic children are toxic with antimony and arsenic. A lot of people don’t know where it’s coming from. Well, simply put, it’s coming, most likely, the baby mattress because we contaminated the baby mattresses early on. But we did something further to children. We started giving them a non-precedent number of vaccines beginning on the first day of life. There’s no question: If you look at vaccines, which aside from PVC being one of the biggest mistakes of the twentieth century, we added vaccines, which may be the second biggest mistake.

What we did was we took a child that lay in a crib made of PVC 99.9 percent of the time that possibly is already contaminated by another baby sleeping on it previously, and we’re adding vaccines beginning on day one. Then we start hitting them again at two, four, six, eight months of age, the period of SIDS. Everyone says there’s no correlation between vaccines and SIDS, but temporarily, there has to be. And when we look at the vaccine information statements and as I was writing the book, I realized every parent is entitled to know the risk as well as the benefits of the vaccine their child is about to be given.

A brief sampling of offices revealed that most parents aren’t getting any information at all about the risk for fear they might say no. Well, there can be no informed consent if you don’t know the risk. The next thing I found out – and unfortunately, this was a self-realization – when I examined my own conscience as an emergency physician for 35 years, I realized that although I was technically a part of the adverse vaccine event reporting system, I realized I had never reported a single illness as a possible adverse event.

Well, since 1986, there had been 300,000 reports of adverse events, ranging from sudden infant death to febrile seizures to vomiting, diarrhea, irritability and lethargy. So I started calling my colleagues, and I realized I wasn’t alone. Then I realized the actual childhood vaccine information act was something that designed to protect manufacturers and hold them innocent of any dangers that may be presented with their vaccines, and it also held doctors innocent of liability. But if was all dependent upon a passive surveillance system we call VAERS, and if VAERS is not reporting or not getting the reports, we may be basing our reports on vaccine safety on as few as one percent of the illnesses that they’re actually causing.

It really gave me another reason for calling the second part of the title “Silent Canaries” –babies are not being given a chance. The idea of a vaccine being given on day one in the nursery for hepatitis B intuitively makes no sense. The risk factors, unless they’re there, are miniscule. The first thing I did when I was doing the book on SIDS a number of years ago was receive a call from a gentleman in New York.

He said, “Dr. Davis, my baby died of SIDS, they’re telling me.” And I said, “Well, can you tell me anything more?” “Well, I was in the pediatrician’s office. I got the hepatitis B that afternoon, and 16 hours later, Lila Rose was dead. The coroner said there was evidence of brain swelling – inflammation. The final report didn’t show that. Both the pediatrician – my child’s pediatrician – and I knew what he said,” so we realized that that adverse event had gone unreported.

So for many years, I thought about that, never realizing I was part of the system that was supposed to be reporting, and then I suddenly concluded that – perhaps not 95 percent – perhaps as many as 99 percent of all adverse events are going unreported. And our entire surveillance program is woefully inadequate. And if, indeed, vaccines are being allowed on the market that hadn’t initially been tested for safety and they contain components of bovine and monkeys and abnormal genetic sequences we’ve seen in those vaccines, we’re looking at a time bomb.

And everyone’s saying more, “More, more, more,” and the book is really saying, “Less, less, less. No more PVC; less vaccines.” The book really tells parents, in essence, “If you really want to protect your babies from two of the biggest dangers introduced in the last 50 years, that parallel the epidemics we’re talking about, you have to get rid of PVC and you have to delay the vaccine exposures. 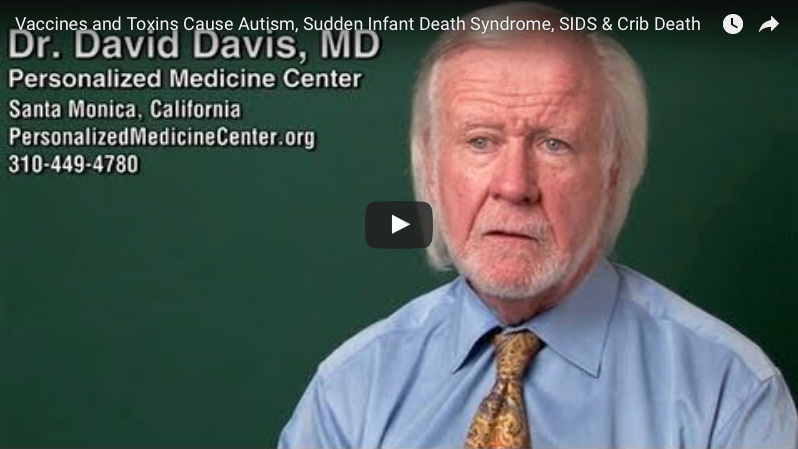