Recovery Of A Little Boy Named Jaxson
(Kristin Selby Gonzalez, parent) I am the director of Autism Education for Enzymedica, but most importantly, I am the mother of a little boy named Jaxson. And Jaxson was diagnosed with autism when he was two and a half years of age. And at that time, Jaxson wasn’t looking, he wasn’t talking, he was doing things like running around the dining room table a hundred times, and also, he had a lot – a lot – of gastrological issues. He wasn’t digesting his food. He wasn’t having bowel movements every day; when he did have a bowel movement, it would be pure diarrhea that would come out of him. And so we knew that something was wrong.

We started putting him on different diets, like the gluten-free/casein-free diet, the Specific Carbohydrate Diet, and even the Body Ecology Diet. And even having him on the most perfect diets – the cleanest diets – that we could find, he still wasn’t digesting his food and he wasn’t able to absorb his vitamins and nutrients.

I was having a lot of digestive issues myself, and then I came across digestive enzymes, and for me, it helped like, the world because here, I was having acid reflux, I was having bloating, I was having constipation. And so I realized if it could help me in such a great way, they must be able to help my son.

And so when we gave my son the digestive enzymes, that is really where the piece of the puzzle started fitting together better because here, again, I said, we had him on the most perfect diets, but he wasn’t breaking up that food. So we learned that digestive enzymes were these things we think of as the workers of the body. Imagine this little Pac-Man going in and helping break up that food for proper digestion and absorption. And here, my little guy, he hadn’t grown in three years; he was wearing the same shoes that he had been three years prior because he wasn’t growing.

Autism: Detoxification, Sensory Integration & Biomedical Treatment
So digestive enzymes were one piece to the puzzle, but we also did other things, like biomedical things like Methyl-B12, glutathione. We did things like Epsom salt baths. But then we also did things like sensory integration techniques, play therapy. So again, this was one piece to the puzzle; however, it was a very important piece, and we’re just so excited to see where our son is today.

Autism: Recovery Through Biomedical Treatment
Our son today is – now, let’s fast-forward – he’s eight years old, and now he’s looking, he’s talking, he’s learning to read, and just recently, he’s actually becoming potty-trained, which, as a parent of a child with special needs of any sort, that is a huge, huge accomplishment. And I really think it’s because his digestive system is actually now more balanced, and it’s not painful for him to, you know, poop on the potty – and that’s a big thing for us mommies and daddies out there is trying to get our kids potty-trained. So for us, the diet and the digestive enzymes were a huge piece to that because we needed to balance him out, and that was one piece to that puzzle.

Autism: Help Heal the Gut with Digestive Enzymes
So we tried other enzymes prior to finding Enzymedica, and I thought everything was created equal. I thought an enzyme was an enzyme, right? Well, then I started to really educate myself and learn why Enzymedica was working and some of the other products we tried didn’t. What Enzymedica does is something they called Thera-Blend, and what that is is it’s a multi-spectrum – it’s a broad spectrum. So they’re putting multiple enzymes in one particular formula, and so instead of having, let’s say, one strain of proteases, they might have multiple strains of proteases. Now why would that be important? Well, that’s important because that’s how our pH works in our body.

So these enzymes work throughout the entire digestive system, throughout the entire pH, which to me, was huge because then that made sense. Wow. Okay. So I tried this other enzyme, and it didn’t work; I tried it another time, and it worked. Well, am I going to pee on one of those sticks that have the little pH every time I want to eat? No. It’s important for us to have enzymes like Enzymedica because they go behind the scenes and they really do a lot of the research to make sure they give us the best enzymes on the market. 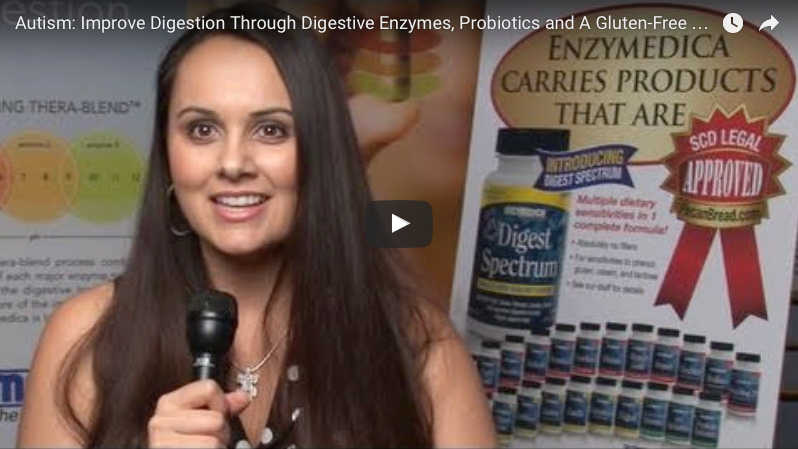