Holly Riley is the parent of a fully recovered autistic child, her son Quinn. Quinn was diagnosed with Autism around the age of two and yet in a just a few short years, through the use of dietary change, biomedical treatment and traditional autism therapies, Quinn was able to come out of the Autism fog. In this video Holly shares what she did to adopt the gluten free casein free diet, which was central to reversing Quinn’s Autism. In this video, Holly shares:

• That dietary intervention was one of the most important steps to Quinn’s recovery.
• Once all dairy and gluten was stopped, Quinn became more connected to his surroundings and his health dramatically improved.
• She used biomedical treatment which also helped recover her son.
• All Defeat Autism Now Doctors recommend changing the diet of an Autistic child.
• Behavior improves and health improves when dairy and gluten are removed.
• A great resource is the Talk About Curing Autism website.
• Rice milk replaced Quinn’s cow milk.
• Replace dairy with water or a grain beverage.
• Start with one meal at a time, such as with breakfast first.
• Gluten and casein are proteins.
• Fruit and vegetables are better snacks than processed foods.
• Avoid soy because the protein in gluten and casein is similar to soy protein.
• The best milk substitute is clean water.
• Read all labels on all foods and make sure the products are free of malt, sugar, food starch, gluten or dairy. Buy vegan products.
• Do basic cooking; cooking from scratch with whole foods (not processed foods, like pasta).
• The crock-pot can be very useful for cooking.
• Prepare gluten free cupcakes in advance and freeze them and then they are available for special occasions.
• Shop at health food stores to avoid foods with chemicals in them and to get highly nutritious organic food.

My son Quinn was diagnosed with autism when he was two years old, and in our research to try and help him, we learned from many other families that dietary intervention can be very powerful. And it was, I think, the single most important step we took in healing our son. And one of the first things we did is stop dairy. We took him off of cow’s milk and saw an incredible change in his behavior. He went from being completely isolated and spinning things in the corner to bringing us toys to play with him, and he was generally much happier and engaging and far more social when we took him off of milk.

Subsequently, we removed all gluten from his diet as well, which is the protein that’s found in wheat and barley and other grains and continued to see tremendous improvement in his behavior and overall health. So I want to share with you a little bit about what I’ve learned about how to implement the diet. If you are just learning about biomedical interventions, I know how overwhelming it is, and I just want to encourage you to give it a try because it can be so very healing and very important for getting on that road to recovery.

It is very challenging; it is not an easy path. I don’t think anybody would claim it would be, but it is what all of the doctors recommend and so many families have found success with, so I encourage you to try. I like to say the diet is really hard to do, but it’s a lot easier than having to diaper a teenager, and so many families see such incredible changes in bowel movements once you change the diet. It is very encouraging to see your child get healthy, and it gives you the strength to continue on the diet.

There’s a lot to learn, and there are many resources to help you with that. One great website for the diet is the TACO website. Talk About Caring Autism has many articles on how to get started. One of the strategies we used was just outright replacement of cow’s milk with rice milk. We were careful to get rice milk that was unsweetened so we wouldn’t add more sugar to his diet. And we literally did…one day, he had cow’s milk in his sippy cup, and the next day, we put rice milk in, and Quinn took right to it. He didn’t have any trouble with that transition in terms of taste or texture

So we were very fortunate, but I know other families who have had their children reject the sippy cup with milk, and one of the strategies that they’ve used is to dilute the cow’s milk with the new rice milk or other. Almond milk is something families use. There’s a potato milk. There are lots of products out there you can use. But to dilute your cow’s milk with the new product and gradually increase the amount of the new milk, decreasing the amount of cow’s milk until gradually, you get rid of the cow’s milk altogether, and that can be very tricky and helpful for those kids with very sensitive taste buds.

Another strategy is to focus on one meal at a time. Breakfast is pretty easy to figure out how to do it gluten-free. There are a lot of breads you can do toasts with; there are a lot of rice-based cereals, though you want to be careful not to do too much sugar. So you might start with breakfast. Bacon and eggs are gluten-free and casein-free, if you don’t use butter. There are a lot of different choices for the breakfast menu.

So what I like to tell families is: Go ahead and dive into one meal and get that one out of the way, and then try and conquer another meal. And the whole time, you start experimenting with recipes and gradually decrease the amount of gluten and casein along the way. The next logical meal to go with would be dinner, and I recommend that the whole family have one dinner rather than trying to prepare separate meals.

The most challenging is probably lunch because when our kids go to school, they’re surrounded by so many different lunch menu items that they can’t have. So I save that one for last because by that point, you’ve probably learned enough that you’re able to get a little creative and overcome that challenge as well. Snacks as well. Fruit, carrots, celery – all of those things are natural. Potatoes, rice – those are all gluten-free and good options for you as well.

Soy is another food that we don’t eat. The protein in soy is very similar to the protein in gluten – the gluten protein and the casein protein – and many children are just as sensitive to soy as they are to the casein and the gluten. So I do recommend that you don’t replace your cow’s milk with soy milk, but go with one or the other alternative to a different grain alternative or potato alternative.

And I often say that the best milk substitute is clean filtered water because once you stop drinking milk by the gallon, you realize that you don’t really need to drink that much milk anyway. And my son gradually just started really loving water, and it’s a very good milk substitute. You quickly learn to read every label on every package of food. It becomes almost a habit. You pick up a package, and you go right to the ingredients, and you learn which ingredients to avoid. Anything with malt, anything with casein or caseinate, anything with gluten or food starch unless it says that it’s gluten-free could contain gluten.

You learn to look for vegan or gluten-free labeling on packaged foods, and many grocery stores now have special gluten-free sections. One thing I would also really recommend is trying to go back to basic cooking. Cooking from scratch with few ingredients is the healthiest way to eat – you know, like our grandmothers used to in the iron skillet. Avoiding Teflon and other plastics in your kitchen is very important to reduce your toxic burden, and really just keeping the food simple.

One of my favorite tools in the kitchen is the crock pot, and having restricted our diet so completely of starches going through the Specific Carbohydrate Diet, I learned that the crock pot is a wonderful place to do slow cooking for meats and vegetables, and it’s very easy if you plan ahead. All you have to do is throw the meat in the pot, throw the vegetables in the pot, plug it in and walk away, and you come home and you have a wonderful smell in the house and dinner’s ready.

One of the greatest challenges we face is having to go to birthday parties or having school parties, and what we do is I’ll get a gluten-free, casein-free cupcake recipe. There are many packages available you can get. While we try not to eat sugar in general, for special occasions, we do have these special gluten-free cakes. I will cook up a batch of cupcakes and then freeze them, so when we do have that birthday party to go to or there’s a special event at school, I can just grab a frozen cupcake. And by the time we arrive at the party or the party happens at school, the cupcake has defrosted and my child has a sweet treat as well.

Another reason to shop at a health food store is because they don’t stock items with artificial colors, artificial flavors, and chemical additives, which are very harmful for kids. I really encourage you to try changing your child’s diet. It’s not easy. No one will ever claim it is, but it’s worth every bit of effort, and I wish you the best of luck. You can do it, and your child can, too. 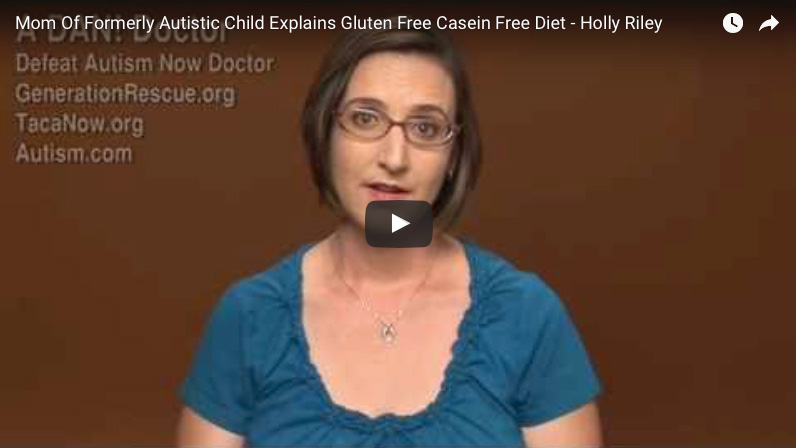