Autistic Child Gets Much Better When Dairy, Gluten and Heavy Metals Are Removed

DAN! Doctor Transformed My Child
(Wren, parent) I’m a mother of an eight-year-old boy with autism. He was actually born with some symptoms of autism, but at the time, I didn’t know. He had illnesses, vomiting, constipation, things like that – very sick child. But at 15 months, it was apparent that he had autism, and he was diagnosed with autism. Even though I have the diagnosis kind of thrown out there, I didn’t know what to do; still trying to solve his physical illnesses.

He was very unhappy, very sad, very angry little child. Went to six or seven different pediatricians, trying to find answers. Pretty much told me, “Well, he has autism. They’re supposed to throw up,” and that was it. I felt horrible. I wanted to help my child. He was 18 months old, 19 months old, found a DAN! Doctor, and within 24 hours of seeing the DAN! Doctor, my son stopped vomiting because he said, “Get him off of milk.” Something so simple – I couldn’t believe it.

Autism Recovery: We Found a Defeat Autism Now Doctor
He stopped vomiting, and he started having kind of regular bowel movements and he could start sleeping. It was a miracle. And then working with this DAN! Doctor for the next year or two, changing the diet and adding supplements really improved my child’s health. Maybe a year after that, doing some chelation therapy, and my son went from being a miserable, sick little boy to a happy little boy who still has autism and a lot of autism symptoms, but he’s happy and he’s healthy and he has a childhood now. And we enjoy being with him now. We look forward to the future because it’ll just keep getting better and better. We keep trying new things all the time, and it’s very exciting.

My name is Megan, and I am a nutrition student at California State University Long Beach, and I’m also a caregiver and a behavioral therapist for children with autism. And I’ve been working with Wren’s son for a little over three years, and I’ve definitely noticed remarkable differences with his behaviors and his mood and all those sorts of things since she is giving him alternative treatments and supplements. And he’s more functioning. He is more interested in learning. He has better attention, and he’s happier and healthier. She’s right: He likes to play now and be interactive with kids who are around him.

Defeat Autism Now Conferences Are For Parents & Medical Professionals
I’m here at my eighth DAN Conference, which is a Defeat Autism Now Conference here in Long Beach where they explain Biomedical Treatment for Autism. And the reason why I keep coming back is because every year, there is new information and it’s very complex sometimes and very overwhelming, all the information they give you because it’s so much great stuff that sometimes it’s hard to get it all at once. And there’s no way you can do it all at once, so I’m here eight times, and I’m learning new things and I am trying to implement all that I can that fit my son. There’s a lot of information that they give you, and you need to incorporate that into your individual child.

Everyone here is great. They’re here to help you, and even though it feels overwhelming and you’re kind of afraid about alternative medicine or it’s too high-level – too much medical speak… No, I’m not good with that stuff, and here I am, for the eighth time, and I actually enjoy coming and learning. And my son is benefiting so much from it, and I meet a lot of great people. There’s a lot of support, so I’ll be back again next year.

Alternative Medicine for Autism is Biomedical Treatment
I have had the best luck with alternative medicine. Alternative medicine, to me, seems to be more – I think we should call it – common sense treatments. Sometimes you want to do what the doctor says because you think doctors are smarter or have somehow gone to a school that they learn secrets that you don’t know about so you have to trust them, and sometimes that’s true, except it’s great to use your own mind and research all the information you can. And if you really look not all alternative treatments are great, but a lot of them are and they just make sense. And some of them can be so simple, and some of them can make such a great difference.

Suggested Biomedical Steps For A Parent With An Autistic Child
As a parent with a child with autism, I recommend the first thing to do starting off is to alternate and experiment with changes in your diet. For us, eliminating milk – dairy products – was a huge thing. It might not be for every child, but that’s a good place to start. You can do your research and try other things – gluten, soy, elimination diets. It’s not hard to do. You can do it. You just have to keep at it, and also eliminating synthetic foods and chemicals in your child’s diet is a big one, too.

From there, you can schedule an appointment with a DAN! Doctor, and they can go further into supplements, vitamins, minerals, deficiencies, toxicities, stuff like that that you need kind of guidance and they’re there to help you. 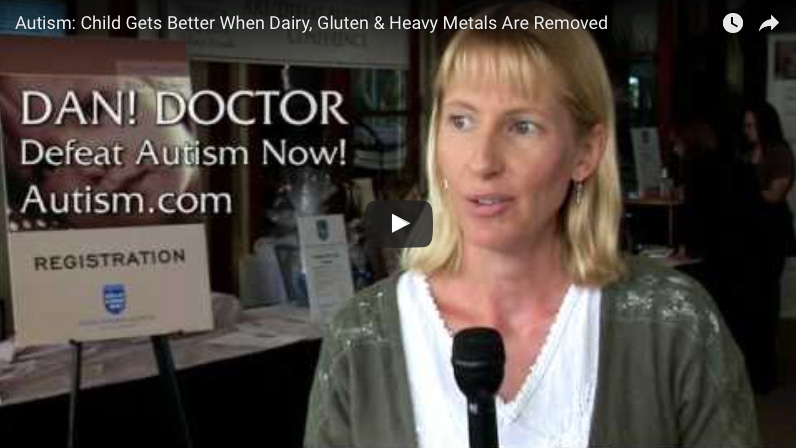