Autism Is A Medical Problem And There Is Proven, Effective Medical Treatment

By Dr. Kenneth Stoller, MD.
For many children, the environmental illness that we have been incorrectly calling autism is actually an illness that has been exacerbated by too many toxic vaccines. Contrary to popular belief, there are plenty of people in governmental circles who know that certain vaccine ingredients, such as ethyl mercury found in the preservative Thimerosal, will cause neurobehavioral problems and negatively impact the health of vaccinated children.

In fact, for over 20 years, the federal government has publicly denied a vaccine-autism link, while at the same time its Vaccine Injury Compensation Program has been awarding damages for vaccine injury to children with brain damage, seizures and autism.

In some children vaccines will cause brain damage, also known medically as encephalopathy, and this is an uncontested fact. What we call autism is really an encephalopathy, and slowly the public is beginning to understand the connection. Vaccines can cause encephalopathies, and Autism is an encephalopathy, so therefore vaccines cause autism. Don’t take my word for it: the vaccine court has ruled this to be the case for almost 100 families despite everything that the Department of Health & Human Services could do to prevent those cases from winning.

So, first and foremost, Autism is a medical problem, and this medical problem becomes obvious when we look at certain biological signposts, called biomarkers. Probably the most important biomarker to initially look at is that of urine porphyrins. Porphyrins are the building blocks of the hemoglobin molecule, which is the stuff that makes red blood cells red, but they are assembled in the mitochondria.

Mitochondria are the little energy generators that are found in our cells. Most children on the Autism spectrum have impaired mitochondrial function and this becomes evident when we run tests on them and find abnormally high levels of porphyrins spilling out in their urine.

Certain metals, particularly toxic metals such as mercury, lead, and arsenic, will inhibit different enzymes of the heme-porphyrin pathway and will therefore cause specific porphyrin patterns (or “profiles”) in the urine. The analysis of these porphyrin profiles can help us determine which metal is involved, and to what degree. Higher porphyrins levels detected in the urine indicate higher toxic metal exposure and body burden. In humans, urinary porphyrin profiles directly reflect mercury body burden and neurobehavioral deficits. And there is evidence that the severity of autism is correlated with the degree to which porphyrins appear in the urine. Which means the presence of autism is directly related to the presence of toxic heavy metals. And there can be more factors involved, such as pesticide exposure and other environmental toxin exposure, which also directly correlate with the incidence of autism.

So supporting mitochondrial function in affected children is one of the very first medical interventions to do. But before I explain that process, let me discuss what I see as the four main medical groupings of children who have autism, which I’m calling an environmentally triggered encephalopathy or post encephalitic syndrome.

With the understanding that there can be overlap between these four groups, the first group is called the post encephalitic syndrome or chronic encephalitic syndrome group. The teenage girls who develop encephalitis from the HPV vaccine are members of this same group that go on to develop autism from the creation of antibodies triggered by the vaccine. The HPV vaccine girls are just in an older age group. The hyper-immune reaction is often transient, but the damage gets done in waves when the offending trigger is reintroduced over and over.

The second group also develops a hyperimmune reaction but instead of creating antibodies that directly attack neurons, or receptors on neurons, they develop a blood clotting disorder, because the body pours out clotting factors thinking it needs to wall off an invading organism. Some of these children develop classic strokes, just like an old man might do. I have seen a 4 month-old baby with a middle cerebral artery stroke after having received a vaccination.

However, most children in this group just develop micro-clots in the brain that are not life threatening. There is a subgroup here, a variation on a theme of clotting mechanisms gone awry, and this is the Shaken Baby group, who have large bleeds in the brain that are blamed on a caregiver being violent with the baby. I am not saying babies never get shaken and injured, but I am saying many parents accused of shaking their baby never injured their child beyond letting them get vaccinated.

The third and fourth group are best lumped together. This is the largest and most challenging grouping because the metabolic and genetic issues in this group are not homogeneous. This is metabolic autism or mitochondrial autism. The little girl Hannah Poling, who won a large settlement from the vaccine court, belongs in this group. Now, while genetics and metabolic errors play their roll, if the poisons in the environment and vaccines weren’t there, these children would develop normally for the most part. This is a very important point: the mothers produced healthy children, but because of the sensitivities in their children, that is, a normal variation in their genetic makeup, these children can’t handle the challenge of the vaccine process with its toxic soup of ingredients. Once vaccinated, these children have a great deal of oxidative stress and immune deregulation often complicated by multiple infections from yeast, bacteria and viruses.

Medical interventions begin with a comprehensive diagnostic workup, and then we look at porphyrins, the immune system, allergies, the intestinal tract, amino acid levels, and organic acids, just to name a few. There are many helpful nutritional supplements that are safe for most affected children to take that will help mitigate certain problems. These include supplements such as Magnesium, probiotics, digestive enzymes and minerals, but we cannot cure the problem with supplements alone.

For most children, a complete change in diet must happen along with aggressive heavy metal detoxification, called chelation therapy, for improvement to occur. And the GI tract, or gut, must be healed first because detoxification is too difficult on the child if the gut is inflamed.

Hyperbaric oxygen therapy, which helps get more oxygen to the cells, has been shown to be very helpful because, HBOT, as it is called, treats the mitochondria. That is how HBOT works its magic on a cellular level.

We also know that most affected children have low glutathione levels, which is the body’s main antioxidant peptide used for detoxification. Stabilizing glutathione levels is an essential part of treatment so that the body can properly detoxify.

There are children who have lost their diagnosis, that is to say, they are no longer labeled as being autistic, by just doing a few simple things, such as going on a Gluten free and Casein free diet. There are many articles in the medical literature supporting the removal of gluten, which is a protein, from the diet of brain-injured patients. The gut/brain connection is real and very much a part of both the cause and the treatment of children on the spectrum. But a child that can be treated with diet alone is an exception. The most severely affected children require multiple interventions over time and the sooner intervention is started, the better. I have successfully treated older teenagers, but even with a healed brain they have lost critical years of development and social skills that they will have to bring in over time. So there are many levels in the healing of these children.

Lastly, I am most concerned with high functioning children on the Autism spectrum because while they may only have impulsivity issues, ADD or some type of sensory integration problem, they respond to the same biomedical interventions I just mentioned, and that can mean the difference between being a self-sufficient adult, or not being able to hold down a job with any consistency.

Autism, which really should be called encephalopathy, is a serious medical problem that deserves a precise plan for determining the extent of medical issues and correcting them whenever possible. The take home message here is that Autism IS a medical problem and that there IS effective medical treatment that has been proven successful for children on the spectrum. 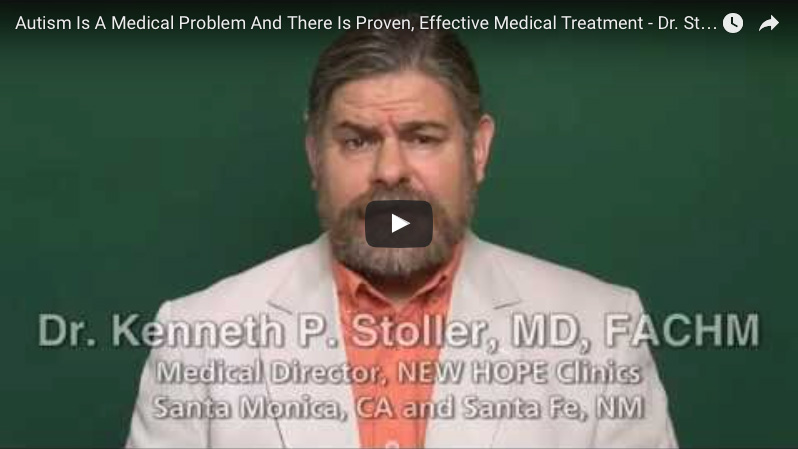